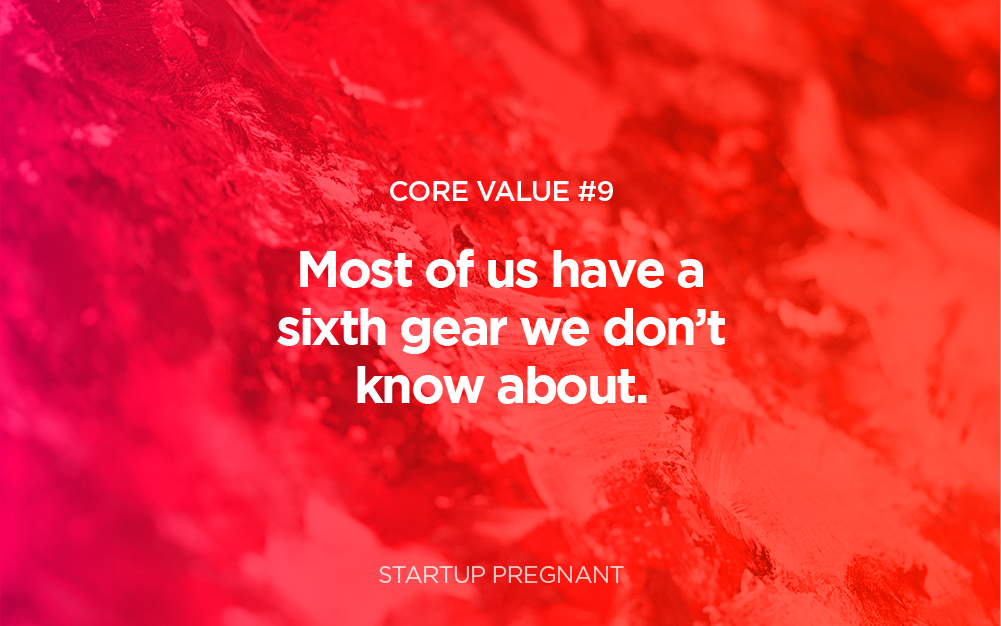 Most of us have a sixth gear we don’t know about.

We’re all capable of far more than we can imagine.

At Startup Pregnant, we believe in the power of human potential, both individual and collective. Parenting often teaches us that we have a previously-unknown-to-us “fifth gear,” and then when faced with a challenge, maybe even a sixth gear we can tap into. I first heard of this phrase from Mathias Jakobsen when we were chatting about the difficulties and challenges—and transformations—of parenting.

Watching humans give birth is one of the most extraordinarily humbling and simultaneously awe-inspiring feats of strength and power and courage. We also see this in the startup landscape, when people dig in, find their resolve and resilience, and make things happen despite all odds.

But there’s an important note to this core value: this does not mean that people are operating at full-tilt, 150%, all-the-time, driving themselves to the ground. The idea of “hustle” as an always-on phenomenon is not what we’re suggesting. Within the rhythm of life, there are times when you press the pedal down and accelerate to use your sixth gear. And there are times of rest.

Listen in for the conversation about this core value: Most people have a sixth gear that they don’t know about.

From November 13th — November 30th, 2017, we’re having a contest on www.startuppregnant.com/thanksgiving-contest! Head to our website to read the rules and prizes, be sure to listen in and leave a comment on every episode released during these two weeks. Head to the show notes listed above to be a part of the contest by leaving a comment on this episode with the question below. Ends November 30th, 2017.