Sometimes the right book at the right time makes all the difference.

This is our library of recommended books to read if you're navigating your health, body, pregnancy, or the early days of parenting. In addition, I've got a round-up of my favorite books on business, entrepreneurship, marketing and leadership. Over the past decade, I've read hundreds of books and some of them are stand-out winners for business and parenting support. Good books, crafted with love and effort by authors who take years to pour wisdom into their pages, can be life-changing. Take a look through our recommendations by category, below!

If you’re pregnant and you need somewhere to start, these are the books that helped get me (and thousands of other women) through pregnancy, postpartum, and more.​

Babies look so cute and cuddly, and it’s deceptive—they are so much work! The first year can feel incredibly intense as you navigate the learning curve that is recovering from birth, learning their sleep and eating patterns, figuring out how to change a diaper, figuring out how to get enough (or barely enough) sleep for yourself, and getting through the first year. Remember that this phase and age won’t last forever, and your first time through might be extremely challenging, and there’s nothing wrong with you if that’s the case. Read up, ask for help, get as much of a team on board as you can, and remember that not knowing how to do something is totally normal.

As a competent, independent adult who was good at things—at work and beyond—it was a shock to the system to feel so unprepared and wholly bad at things for a while. It got better (so much better!), but it took some time and a lot of tears.

One American Mother Discovers the Wisdom of French Parenting

This book is one of my favorite all-around parenting philosophy books that sums up who I want to be as a parent in a nutshell. It’s short, it’s small, and it’s practical. American writer Pamela Druckerman reports on her life as an expat living in France, and how different the cultures of parenting are between the two countries. As a mother in France, she realizes how much more calm and laid-back they are (at least across some dimensions), and how much more space and autonomy they give their children.

The idea of the “cadre” or the structure, the frame, is a concept I’ve kept with me in the years since reading this book. People like structure, and they like to know the rules. They also like to know how they can be free within the rules, and make, bend, or choose alternatives and choices within the structure. In our house, that literally translates to a plate with three sections: my husband and I each pick something for dinner, and our child can pick a third thing—he can choose anything. It has to be something in the house that we have. We serve a portion of it, and he’s welcome to have more of it—after he’s eaten everything on his plate. He does not have to eat what we serve him, and he can eat his small portion if he chooses, but if he’s hungry, there are two portions of food on his plate.

He thrives with this container, this “structure,” and we’ve given him some autonomy and choice, while also being clear on the rules. If he’s hungry enough, he eats the food. Other nights, he picks pasta, and he eats the 10 pieces and skips the rest. We don’t fuss and he puts his plate away, other food untouched. There will be more food the next night.

This is one small example of the philosophy in practice, and how it’s made our lives infinitely simpler. So much of parenting, to me, is about being consistent (to the point of being boringly repetitive), and in creating a container where the child has space to be free and knows where the edges are. 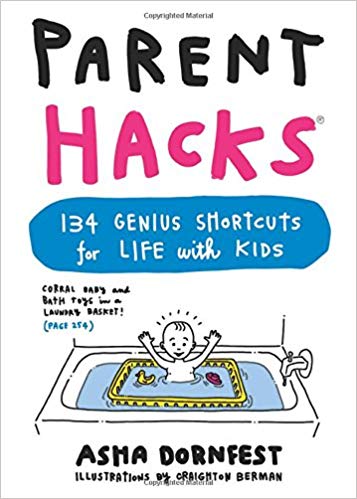 134 Genius Shortcuts for Life with Kids

This book is my go-to gift for new parents everywhere, and it makes me smile with glee. A small, compact book with beautiful color illustrations, Parent Hacks is by blogger Asha Dornfest who crowdsourced all the best tips and tricks from parents everywhere.

At its heart, the book is about an ethos of simplicity and whimsy. Rather than purchase thousands of things, to try to get everything right, this book is about doing the best you can with what you’ve got, and making it work with creative solutions. I LOVED the tip on laundry baskets without holes doubling as baby bath buckets—genius! Because you don’t need a special baby bath; they’re going to outgrow it in a handful of months, anyways. And another great tip was getting 6 pacifiers and putting them in every corner of the crib, so you’re not chasing around in the dark, looking for a lost binky. You just blindly grab at a corner and odds are, you’ll find it—and get right back to sleep.

Speaking of sleep, if you’re completely zonked and you need a break, you can play “tattoo parlor” with your kids and give them markers and let them draw all over your back. Why? So you can lie down for a few minutes and regather your strength to keep going through the rest of the day. It’ll wash off in the next few showers, provided you don’t give them Sharpies. 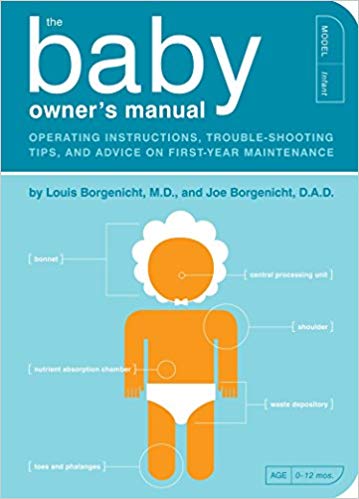 Colorful pictures and graphics, and a modernized version of the coffee-table books of yesterday. This one feels easy and useful. If I did it again, I’d pick up this one first, Before What To Expect The First Year or the Dr. Sear’s Baby Book. 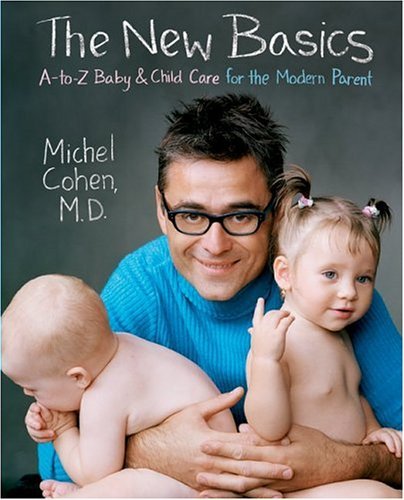 The New Basics: A to Z

This book was my JAM. It’s an indexed, organized, alphabetical list of all the things that could possibly need your attention during your baby and toddler’s life, and you can look it up by topic: genius.

The laid-back approach to not worrying about things was a great fit for my personality. When I looked up details on a particular illness, the doctor would say, “You’re probably fine; here’s why not to worry; don’t do anything extra and Jimmy will be fine in 3-5 days.” This helped reduce my anxiety immensely and become a more laid back parent and say “Ah, kid, this isn’t fun, and we’ll get through it,”—rather than panic and try to get to the doctor with every new thing.

As a bonus, because we set the baseline at a more “chill” level, when they did tell us to take something seriously, I knew to act and pay attention. My partner and I both kept this book in our basket on the top shelf where we keep the kid’s tylenol, nose frida, and other first aid supplies, and we looked at it as our first go-to with every new issue we ran into as parents.

Probably my favorite thing about the entire philosophy of this pediatrics practice is there on-call nurse hotline. Rather than take sick kids to the doctor (and risk infecting all the well kids at their regular check-ups), they have nurses on call to chat about anything. I’ve used them SO often, and they give us such helpful advice and tell us when to check in and when to stay patient. We’ve even been through ear infections and Hand Foot Mouth and Norovirus and they’ve been with us every red bump, gooey ear, and vomiting step of the way.

The Happiest Baby on the Block

This book is so helpful! It goes through how to calm newborns, and explains how the loud, shushing, watery world of the womb was the place the baby was used to, and how the world around is silent and strange—and can be aggravating to babies.

Dr. Harvey Karp is a miracle worker, and you can watch videos on YouTube of how he calms babies with the 5 S’s of soothing mechanisms—shushing, swaddling, side-position, swinging, and sucking. The trick to the white noise is to make it way louder than you think; it’s not the DOHM that does the trick, it’s like 5x louder like two roaring fans and an air conditioner are on, plus a room full of DOHM white noise machines. This book is great, but if you don’t have time for it to get to your house fast enough, google for The 5 S’s and watch some YouTube videos, and then watch some videos on how to swaddle. Getting the swaddle right (and snug enough) takes some practice. Those babies can get out of swaddles! We ended up getting a few of the velcro-in ones, and they were magic. 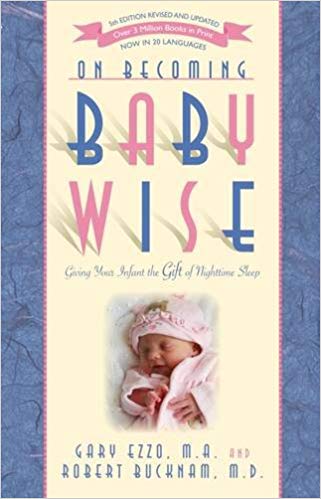 Giving Your Infant the Gift of Nighttime Sleep

I haven’t read this book yet, but from all the summaries and all of my friends who love it, I think it will be a time saver for parents! What I’ve seen happen is people freak out about schedules or think they have to be zombie-like in their immediate responses to babies, when it’s okay to implement a gentle and eased-into schedule as your baby grows and you learn about each other. Over time, as your baby grows, one of the things they are doing is learning—about you, the environment, being hungry, how to sleep, how to get back to sleep. It’s okay to give them a small amount of time to fuss and figure things out and not to immediately pop a boob in every second that they make a squawk. (Babies are pretty noisy, by the way! There were so many times we woke while co-sleeping to our newborn in the bassinet grunting and huffing and burping and purring and we’d look over and realize his eyes were closed and he was wiggling around, figuring life out.)

From what I can tell, Baby Wise helps parents, often nursing moms, figure out how to organize some of the chaos and feel better about feeding, sleeping, and routines. While some folks balk at the idea of schedules, I say if it brings you sanity, helps you sleep, reduces your level of fatigue back into manageable ranges, it can be a great thing. Many moms I know say that it helped them figure out what to do, that it helped boost their milk supply (because being overly exhausted can deplete your supply), and it helped people stick with breastfeeding for a full year, because they would have quit earlier otherwise. If those are the benefits to a schedule, I’ll take it. 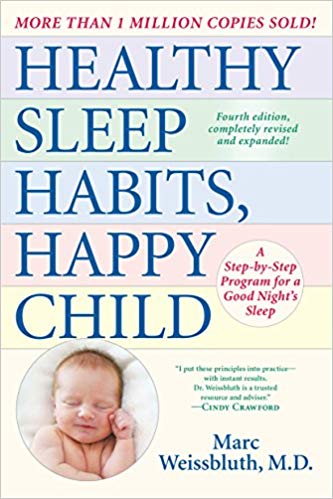 A Step-by-Step Program for a Good Night’s Sleep

This book should be required reading for all parents, but it seems painful to require reading just when you’re in the throes of sleep deprivation in the newborn weeks! Thankfully, this dense book on sleep is easier to parse because the author gives you clear instructions on where to start depending on how sleep deprived you are.

My main takeaways? Children are chronically sleep deprived in our current culture, and parents aren’t helping. We need to let children learn to sleep, and better understand just how much and how weird sleep really is. Babies make noise—don’t wake them or get them! Let them work it out and gently help them stitch together sleep cycles. They need so much more sleep than we think they do, and children are often wired from being overtired and should be put to bed WAY earlier.

This book changed our life when it comes to sleep. As a family, we insist on early bedtimes and structured naps, and it’s made a huge difference in the overall calm of our family. We would evangelize on the importance of sleep to more people, but we don’t make it out that much in the evenings—we’re all in bed long before!